While Colin and Alisha Niemeyer are relative newcomers to Kawdy Outfitters, they certainly aren’t new to outfitting in B.C. or guiding hunts in this spectacular country. In fact, Colin has been a sheep hunting guide in northern B.C. since he was 18 years old!

Colin grew up in a hunting family. His father was a taxidermist and he was involved in the industry from a very young age. Colin began working in the industry as a camp jack and wrangler when he was a teenager. By the time Colin was 18, he was already guiding stone sheep hunts. 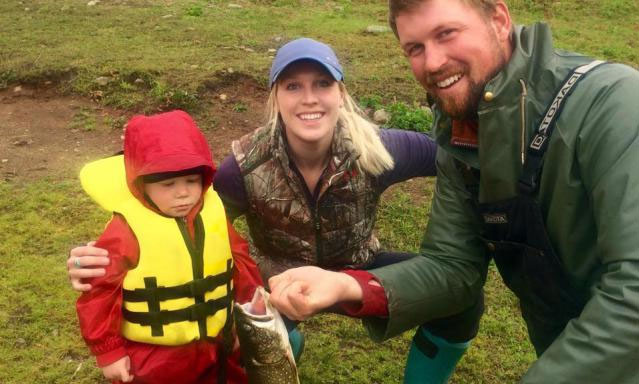 While attending university and guiding sheep hunts in the summer, it became clear to Colin that he wanted to operate his own business and launch a guided hunting outfit. While still in school, he had the opportunity to purchase his first territory, an area in central B.C. It was there that Niemeyer Outfitting was born. This area allowed Colin to offer bear, mountain goat moose, deer and cat hunts.

Colin continued to guide stone sheep hunts in northern B.C. during the summer months. In the fall, he’d move down to central B.C. to run Niemeyer outfitting, which he continued to grow for the next nine years.

Kawdy Outfitters first earned its reputation under the leadership of Stan Lancaster who purchased the outfit in the 1980’s and continued operating it for more than 30 years.  Stan built three incredible base camps and base camp facilities, plus cabins for spike camps and more. In one of the most remote parts of British Columbia along the border with the Yukon, infrastructure like this is something very special.

In perhaps the best hunting region in British Columbia and with excellent camps on the ground, Kawdy Outfitters suddenly became a highly desirable business when Stan Lancaster decided to retire. Colin had the opportunity to purchase the business from Stan and never looked back. Colin and Alisha sold Niemeyer Outfitting and jumped at the chance to move their headquarters to northern British Columbia, just south of Whitehorse, Yukon.

After guiding hunts in this area for just shy of two decades, Colin is thrilled to have the opportunity to move his operation here. What this area offers in terms of both population density and trophy quality for so many different species is something that would be difficult to rival anywhere else.

If you’d like to learn more about our hunting adventures, please call or send us a message! We would love to hear from you and we hope to see you here at hunting camp soon.