Stories from the Hunt: Interview with A Kawdy Hunter

We recently had the opportunity to speak with one of our clients from last season about his experience hunting moose and mountain caribou with us in northern British Columbia. We’d like to thank Mike Carter for taking the time to tell us about his hunt. 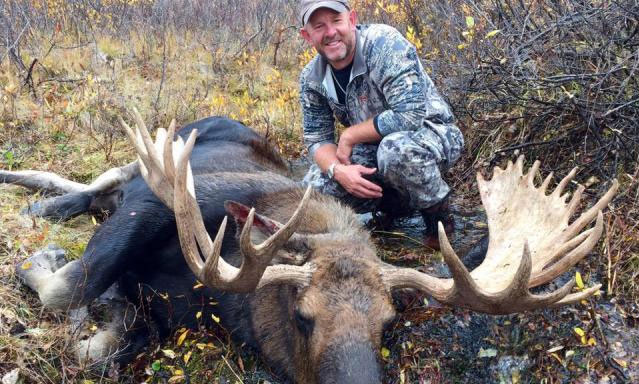 Here’s what Mike had to say about his experience.

“I’m a P.A. and I run a rural health clinic,” Mike told us. “My friend Brad is an orthopedic surgeon and he asked me about going on a moose hunt. At first I told Brad that I wasn’t sure if I wanted to spend the money and I didn’t think I’d go.

“Well that next week I had to tell four people they had cancer and two of them were younger than me,” Mike Continued. “That really made me reconsider. So I called Brad back and I said ‘Ok, let’s go’.”

Mike and Brad first heard about Kawdy Outfitters from friends who had hunted with us the season before. They had spoken very highly of their experience, and Mike decided to take their recommendation.

“It was a pretty easy trip up,” Mike explained. “There was a snag in Vancouver when the firearms declarations took longer than expected. We didn’t give ourselves a long enough layover and missed our flight to Whitehorse. Fortunately, we got on a later flight and still made it.

“We arrived at the hotel that Colin had arranged in Whitehorse, and it was all hassle free,” Mike continued. “Colin took care of everything. In fact, weeks prior when I had called to book the hotel, I told them that we were hunting with Kawdy Outfitters. I asked if they wanted my credit card and the receptionist said ‘No, if you’re hunting with Colin, you’re good.’ Everything was that easy.”

The next day, Mike and Brad took a taxi to the dock where the plane was waiting for them. They loaded up their gear and flew in to our base camp.

“After picking up hunters who were returning from their hunt, the plane came back for us,” Mike said. “Brad and I flew with our guides to our camp for the duration of the hunt. We started hunting the next morning and hunted around camp for the first day. My guide, Matt, asked if I was willing to camp out and I said yes. So while Brad and his guide hunted from the camp, Matt and I left to spike out.”

Mike and Matt rode about six hours from camp with four packhorses, plus their saddle horses and spiked out there for several days.

“We would get up on a mountain to glass across,” Mike recalled. “I think it was on the fifth day that we spotted a bunch of cows. The bulls were in the timber but Matt said we should go and try to call the bull out.”

Just as they were riding toward the cows, Mike and his guide spotted another moose, and this one was on its own. Seeing immediately that it was a big bull, they tied up the horses down below the bull and began calling.

“Pretty soon, Matt asked if I could hear it,” Mike continued. “I couldn’t hear a thing. But after about 20 minutes, I could hear it. And I mean, it sounded like a tank coming down the hill! I looked and my watch and it had been 29 minutes since Matt started calling. Just then, the bull appeared.

“Matt told me not to shoot, just to let him keep coming,” Mike told us. “The moose came out into the open and he was throwing his head sideways. It was awesome! Matt kept saying, ‘Let him come.’ Finally, I looked through my scope and all I could see was brown. I couldn’t take it anymore so I shot him right through the chest. He turned sideways and stood there. I shot him in the shoulder and it dropped him.”

As luck would have it, they walked over to the bull to find that he had rolled right into a creek. Unable to pull him out, they had to skin him right there in the creek. When they finally had the bull loaded on the mules, Mike and his guide went to pack up their spike camp then and made the long ride back to camp. It was almost midnight when they arrived.

In the meantime, Brad had already killed a nice bull moose on the second day of the hunt. With both moose done, it was time to go caribou hunting.

“We hadn’t seen many caribou at that point,” Mike explained. “So we headed up to a different lake that the guides said would be a good caribou spot. But after riding up there, we weren’t having a lot of luck there either. With two days left to hunt, we made the decision to go back to camp to hunt around there for the rest of the trip.”

The very next day, Mike and his guide spotted a group of caribou with one really big bull. Mike ended up making a great shot and killed his mountain caribou that day. Then on the last day of the hunt, Brad killed a caribou, putting the final touches on a memorable trip.

“The food was awesome,” Mike remembered. “Our cook’s name was Rachel. She rode with us and she could shoe horses. She was both tough and an excellent cook. At camp, Brad and I roomed in a little cabin. You really couldn’t have asked for a better hunt.  Colin arranged for the taxidermy, taking care of everything. He makes it so easy.”

We asked Mike if he could offer any advice to hunters getting ready for their first trip with us.

“Do your best to get in shape, but it’s not that bad,” he said. “They make it very easy if you’re comfortable on a horse. Ride a little bit, get in shape and shoot your gun.

“I plan on going back and taking my son someday,” Mike said in closing. “It’s a great hunt and I would recommend it 10-star. My moose made Boone and Crockett, so I was really excited about that.

“You know, I would honestly sell my pickup and downsize to go on this trip now that I know how good it is,” Mike concluded. “You can’t take it with you. Our friends who recommended this hunt are guys who have hunted all over the world. They said it would be the best hunt I ever went on. And they were correct.”

Mike said that on his next trip, he hopes to return for a mountain goat hunt. “I have to go before that mountain gets too big!” he said.

Thanks again to Mike for telling his story and allowing us to share it. Mike, we hope to see you on that mountain goat hunt!

For information about hunting with Kawdy Outfitters, please explore the rest of our website and don’t hesitate to contact us with any questions.

Ryan McSparran is an outdoor writer, a hunting and fly fishing guide, and very proud to be a part of the Kawdy Outfitters team.